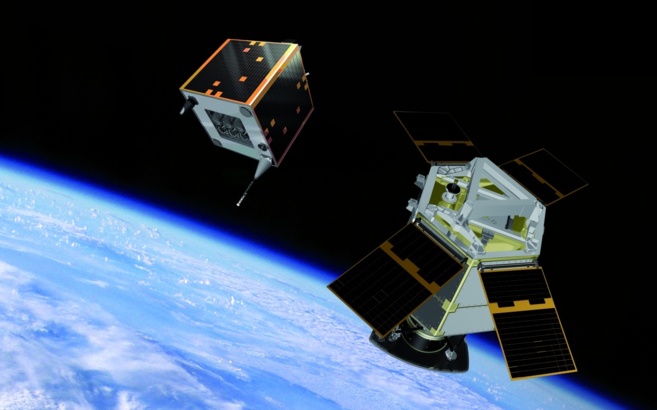 GEOSAT now owns and operates Deimos-1 and -2 satellites under the GEOSAT-1 and -2 names, establishing itself as one of the main European EO satellite operators.

Since the first half of 2021, GEOSAT operates GEOSAT-1 (wide coverage) and GEOSAT-2 (very high resolution) satellites, which were formerly known as Deimos-1 and -2, to provide Earth Observation products and services to the Global market.

GEOSAT acquired the two satellites from the insolvent Urthecast group, together with their 6 bn square kilometers imagery archive, and the technical and human resources to operate the satellites, establishing itself as the only EO satellite operator in Portugal and Spain and one of the two European providers of submetric optical imagery.

To reinforce its market access and foster future innovations, GEOSAT established a strategic partnership with THRUSTERS UNLIMITED from Mexico, which has acquired exclusive rights over Mexico and 25% of the satellites’ capabilities over the non-European market. Data under this partnership is being traded with the brand “Thrusters Unlimited powered by Geosat”.

The partnership was already unveiled in Rome this September, at the G20 Space Economy Leaders Meeting 2021, in which Thrusters represented the Mexican Space Industry thru the presence of Benjamin Najar L., President of the Space Commission of FEMIA (Mexican Aerospace Industry Association) and Chairman of THRUSTERS UNLIMITED, to provide a view on how Space-based EO helps “people, the planet and prosperity”.

Francisco Vilhena da Cunha, CEO of GEOSAT highlights that “partnering with Thrusters allows us to enhance market access, ensuring that high-quality and timely EO services reach an increasingly democratized market, and contribute to tailor our portfolio to future global needs”.

On THRUSTERS side, the CEO Benjamin Najar, Jr. mentioned that “this partnership generates a big development in the Earth Observation services in America adding a new provider, facilitating new and better products with a different business focus propelling the Space democratization with lower costs and impressive quality”. Also adding that the Mexican Space Agency has been very supportive of the project an intends to support further work in other areas.

In fact, at FAMEX AIRSHOW 2021 final negotiations took place with the Mexican Space Agency, together with other Mexican Government agencies to provide with VHR EO services, delivered from Mexico.

GEOSAT – Global Earth Observation Satellites is a company headquartered in Portugal with offices in Portugal and Spain, from which it operates GEOSAT-1 and GEOSAT-2 EO satellites and delivers EO products and services for all market verticals. GEOSAT is a joint venture between the Omnidea Group (55%), the engineering and product development center CEiiA (35%) and the Atlantic International Research Centre (10%).

THRUSTERS UNLIMITED is a decentralized company from Aeroespacio Net (Aviation) company headquartered in Mexico City, with offices in Texas, that was born in 2018 specifically designed to cover all concepts related to space industry, from services marketing to production of space products. Focused in developing the space industry in Mexico and providing VHR EO services.

We use cookies on our website to give you the most relevant experience by remembering your preferences and repeat visits. By clicking “Accept All”, you consent to the use of ALL the cookies. However, you may visit "Cookie Settings" to provide a controlled consent.
Cookie SettingsAccept All
Manage consent

This website uses cookies to improve your experience while you navigate through the website. Out of these, the cookies that are categorized as necessary are stored on your browser as they are essential for the working of basic functionalities of the website. We also use third-party cookies that help us analyze and understand how you use this website. These cookies will be stored in your browser only with your consent. You also have the option to opt-out of these cookies. But opting out of some of these cookies may affect your browsing experience.
Necessary Siempre activado
Necessary cookies are absolutely essential for the website to function properly. These cookies ensure basic functionalities and security features of the website, anonymously.
Functional
Functional cookies help to perform certain functionalities like sharing the content of the website on social media platforms, collect feedbacks, and other third-party features.
Performance
Performance cookies are used to understand and analyze the key performance indexes of the website which helps in delivering a better user experience for the visitors.
Analytics
Analytical cookies are used to understand how visitors interact with the website. These cookies help provide information on metrics the number of visitors, bounce rate, traffic source, etc.
Advertisement
Advertisement cookies are used to provide visitors with relevant ads and marketing campaigns. These cookies track visitors across websites and collect information to provide customized ads.
Others
Other uncategorized cookies are those that are being analyzed and have not been classified into a category as yet.
GUARDAR Y ACEPTAR